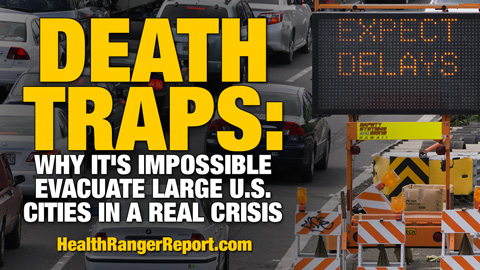 In a recent podcast, Natural News founder/editor Mike Adams, the Health Ranger, sat down to explain why it will be inherently dangerous to be living in a large city should there be a “stuff hits the fan” scenario, mostly because getting out of those cities will become an impossibility.

“And yet, we are falsely told by the government and state-run media that FEMA will come to the rescue of anyone in need. In reality, YOU are expendable… and there is no real plan in place to save you if things go wrong,” Adams says in his podcast.

As noted in the recently published book “Raven Rock,” which describes how the U.S. government at the dawn of the nuclear age initially planned to save as many Americans as possible but over the years began to realize it was more important to preserve the national government, Adams says Washington’s first and only priority in an emergency “is to save itself, not save the people.”

As such, “Maybe it’s time to rethink the wisdom of living in a high population density DEATH TRAP known as a ‘city,’” he said.

Raven Rock author Garrett Graff noted that when he began researching his book, one of the most interesting — and shocking — things he learned early on is how President Eisenhower plainly understood that there was no ‘winning’ a nuclear war and that making plans to save the bulk of the American people was a fool’s errand — something that just was not logistically possible.

“Part of what makes these plans so interesting is thinking through…this idea of what you’re going to save for America,” Graff told NPR after his book was published in June. “If you’re trying to preserve and restart the government after an attack, [it] becomes this very existential question about what is America? Are you trying to preserve the presidency? Are you preserving the three branches of government? Or are you preserving even the historical totems that have bound us together across generations as Americans?”

Adams notes that question has long been answered. “The plans just don’t exist” for anyone to escape a large city, he said, so that’s why the government has no plans to even warn the public of impending catastrophes.

The Health Ranger went on to reference a book he recently completed by former mainstream media journalist Ted Koppel called “Lights Out,” which “talks about the risks” to U.S. power infrastructure from cyber warfare. He noted that Koppel did not fill his book with interesting theories or his own thoughts on the situation, but rather he actually interviewed a number of current and former government officials.

“The one thing” that emerged from the book, Adams said, is that “the government really has no plans to evacuate the cities.”

Later in his podcast, Adams said that during his interviewing process, Koppel also found out from local officials in New York City, which he chose for its sheer size, that there was only enough food for a few hundred thousand people following a major grid-down scenario (there are currently about 8.5 million people living in New York City proper).

So clearly, there isn’t enough food to feed everyone. And what’s more, trying to get out of the city via traditional highway routes will also be impossible, Adams noted, because they will become clogged almost immediately.

There also won’t be enough fresh water, and with no electricity, the water treatment plants won’t be functioning either, having run out of diesel fuel within a few days powering emergency generators.

The fact is, as Adams notes, the cities are simply going to be death traps — nothing will get in and few will be able to get out. And what’s more, the Health Ranger concludes, the government isn’t even planning on the worst of the worst nightmares because they don’t think in those terms.

It’s an interesting and well-reasoned podcast, which you can listen to in its entirety by clicking here or clicking below. Find more news on bugging out from urban areas at Bugout.news.